uq_postProcessInversion: Extension of docmentation to deal with multiple calls of this function, code corrections and extension

I observed some unexpected and some undocumented behavior of
uq_postProcessInversion.m, that may require some changes in the code
and in the manual UQLab - Manual for Bayesian inversion

If this assumption is correct, I suggest to point out this explicitly in the documentation.
An improved version of the following suggestion can be found below in the my reply to my request. Olaf
For example, you could write that the replacing the command

will generate the following result:

End of suggestion that is improved in next post.

2.) If my assumption on the default esults of multiple calls to uq_postProcessInversion to myBayesianAnalysis is correct then there seems to be an exception if the option ‘priorPredictive’ is involved.

Testing and investigating the code I deduced: When uq_postProcessInversion
is called with the value provied for ‘priorPredictive’ being a positive integer,
the resulting samples from the prior distribution and from the prior predictive distribution are stored in myBayesianAnalysis.Results.PostProc.PriorPredSample.

Since creating this samples had required further function evaluations
and the sample seem to be independent of the values for badChains or bornIn, it can be considered as a feature if the samples are not automatically removed. But this is seems to be an exception of the normal behavior of uq_postProcessInversion, see also the discussion above. Therefore, I suggest be discuss this behavior in the manual.

3.) Moreover, this behavior can be quite irritating if one is trying to change the plots generated by uq_display(myBayesianAnalysis) by getting rid of these samples.

For example. after evaluating the model 1 plot generated by
uq_Example_Inversion_04_PredPrey.m, see the picture at the end of the example
INVERSION: PREDATOR-PREY MODEL CALIBRATION on the UQLab-Server: 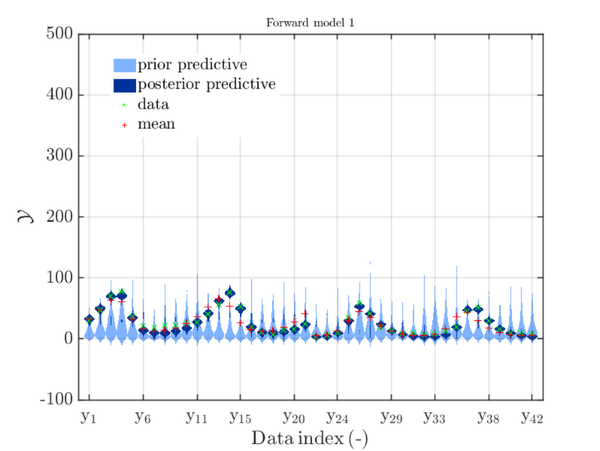 one may be interested to investigate this plot without the priori density distribution, see 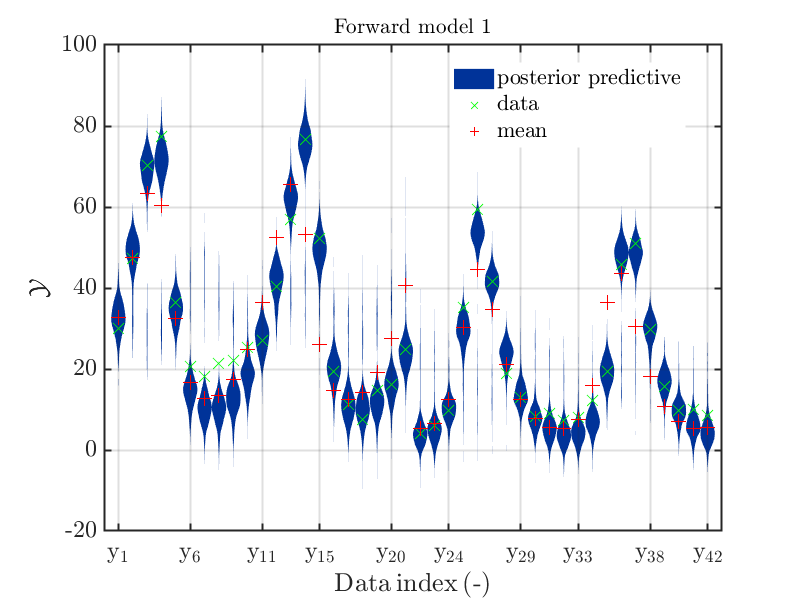 And I like to able to do this without having to call uq_createAnalysis again. As pointed out above, one can not get rid of the samples for the priori predictive distribution by applying badChainsIndex to myBayesianAnalysis without using the priorPredictive.

Trying to get rid of the samples by using

Even if one can find a way do get rid of the samples for the prior predictive distribution by a direct change of the contents of myBayesianAnalysis, I think that uq_postProcessInversion should provide a method to get rid of them.
For example, using a negative number for the option ‘priorPredictive’ could
a good way to activate this feature without changing the result of existing correct code.

4.) Moreover, concerning the documentation of uq_postProcessInversion: in Section 3.3 of the manual I suggest to point there that (starting with UQLab relase 1.3.0), this function is called with its default options at the end of the evaluation of uq_createAnalysis and maybe also of some other ULQllab function to automatically post-process the data, to generate a sample by any MCMC sampler and to create contents in ``myBayesianAnalysis.Results,PostProc. ‘’
Yes, this information can already be found in the release notes and in the comments in Section 6.3 of uq_Example_Inversion_03_Hydro.m but it would be nice if this would also be pointed out in the manual.

5) I could also be grateful, if the contents of myBayesianAnalysis.Results,PostProc
created by uq_postProcessInversion would be discussed in the manual.

Okay, I think that this text already to long.

Bayesian inference with multiple forward model with different numbers of provided measurements but with one common discrepancy model and parameter?
olaf.klein (Olaf Klein) June 12, 2020, 8:01am #2

after reading my above suggestion for the extension of the documentation at the end of the first point again, I decided to rewrite it by ignoring now the current example
in the documentation but dealing with the use-case I had in mind:

For example, assume that the results of a Bayesian inversion analysis
are investigated

2) After some further investigations it is decided that one needs also to increase the burn-in fraction from its default value of 50 % to 70 %. Then one should be aware that using now

would somehow “undelete” the removed chains, since the contents of ayesianAnalysis.Results.PostPro are not updated but recreated.
To ensure that the resuls in BayesianAnalysis.Results.PostPro are computed without the samples points generated by the first and fifth chains from the original
MCMC-sample and also without the results from the initial 70 % of the steps in the MCMC algorithm one needs the command

3) To investigate afterwards the effect of decreasing the burn-in fraction to 60 %, , one could use the command