My major is chemical engineering and I am using data simulation programs. However, data extraction takes a long time because it uses a CFD program that includes formulas such as hydrodynamics.

I am interested in studying RBDO for optimal design of reactor. It was very interesting to see an example of RBDO using MC. However, MC requires too much data compared to PCE, making it difficult to incorporate into my research.
So i think that the best way is PCE.

Is Data Driven RBDO using PCE available in UQLab?
I want to set the failure probability numerically like 0.001 to get the optimum values ​​and optimal design variables of the objective function.

Yes you can use PCE for solving RBDO problems with UQLab. Please have a look at the example 04 of the RBDO module (Surrogate-assisted RBDO, Section 4.2 - https://www.uqlab.com/rbdo-surrogate-assisted-rbdo ) for more details how to set up the analysis.
Basically all you need to do is to choose the size of the initial experimental design and set the options of the PCE model. The module will then adaptively build the surrogate model with the aim of accurately representing the limit-state surface. Once this is done, the reliability-based design optimization will be carried out using the built PCE instead of the original model.

I would suggest you also have a look at the possibility of using Kriging instead of PCE.

Thank you for your kind reply

I read the Surrogate-assisted RBDO you said.
But what I said is, like Data driven PCE, it’s a way of optimizing only with Data.
However, Surrogate-assisted RBDO seems to be a case of knowing the limit state function of the system in advance, not using only data. However, I thought that the limit state function may not be known in a complex system.

2- (1) When declaring the distribution of design variable, is there any reason to use only standard deviation without using mean?

2- (2) When using PCE, the code is shown below.
PCEOpts. Degree = 2:10;
PCEOpts.ExpDesign.NSamples = 10;
PCEOpts.ExpDesign.Sampling = ‘LHS’;
Is it correct to see that the above code extracts 10 experimental designs from the range of d1 and d2 initially declared as gaussian using LHS technique and builds a PCE model?
If yes, is it possible to establish a Data driven PCE model if you already have a lot of data?

As stated above, it was declared that the optimal solution was derived by adding up to 50 data. If you look at the results in the figure below, you can see that it ends in 9 samples. Then, is it possible that PCE is the optimal solution among the three methods (SVR, PCE, and Kriging)?

I have additional questions about Data driven RBDO.

It was prepared with reference to the above literature. 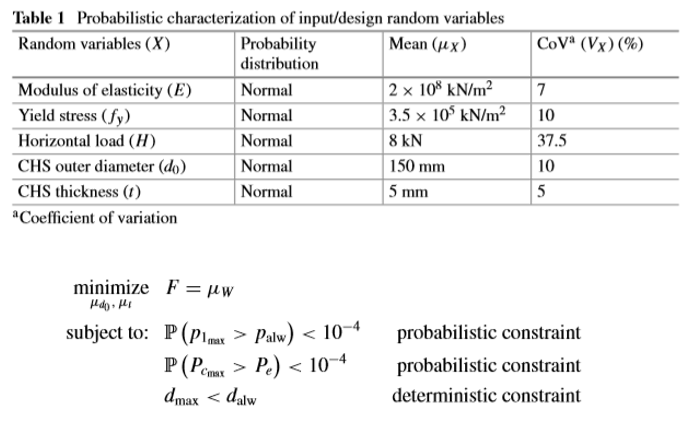 As shown in the picture above,
Is it possible to set the probability of failure and find the optimal solution using uqlab?
(only using data, not defining limit state function and cost function)

It seems to me that the method is different from uqlab’s surrogate assisted RBDO.

Hi @Chemicaleng,
In short, yes you can perform RBDO with data-driven PCE in UQLab. I will go through your questions point by point now.

Is it possible to set the probability of failure and find the optimal solution using uqlab?
(only using data, not defining limit state function and cost function)

–> Yes you can do that using UQLab’s RBDO as I explained in the previous post.