Ask a question about copula.
‘uq_Example_input_02_MarginalsAndGaussianCopula’

I would like to ask a question based on the example above. 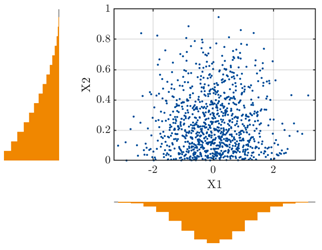 X1 is set to gaussian [0, 1] and X2 is set to beta [1 3].
Y = f (X1, X2)
In my opinion, I confirmed that the distributions of X1 and X2 are the gaussian and beta distributions respectively, and understood that they are the data points to extract the blue points.

(I have a lack of understanding about copula, so I would like to ask a basic question.)

When setting up a UQ problem, you have to define what are your input distributions. Either by expert knowledge (e.g. selecting the distributions from the relevant literature), or to infer them from input data. In the latter case you should use the inference module of UQLab with your data to produce the proper INPUT object.
You may also refer to this post for more detailed information.