Hello!
I conduce metamodeling using data driven based polynomial chaos expansion. I have some question about PCE.
Computational fluid dynamics (CFD) data with 5 input variables is used, and the range of output variables is approximately 0.01 to 0.13. A total of 400 data were used, and the experimental design used LHS. 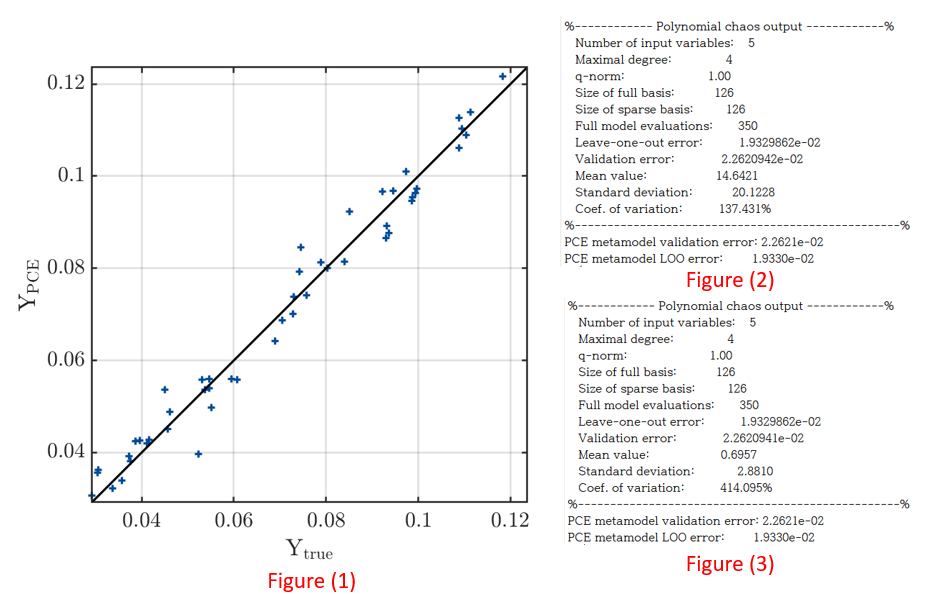 After PCE modeling, the fitting result is the same as figure(1) and the mean is 14.6421 as figure(2). However, considering that the maximum value of the output variable is 0.13, the fitting does not seem to be working properly. In other words, it seems to be overfitting that fits only the given data.

In addition, when the input variable was normalized between 0 and 1 using the normalize (A,‘range’) matlab function, it has the same LOO and validation error as figure(3), but when one input dataset is substituted, the output is 2 Is coming out with a value over. In other words, the fitting is still not working well.

I have some questions in this part.

(1) In my opinion, overfitting occurred due to the small number of data compared to the non-linearity of the data, so the mean value appears to be strange as shown in figure(2). Is this the only way to increase the number of data? Is there any way to prevent overfitting like dropout in neural network?

(2) Determining the degree of PCE is only increasing the order from 1 to finding the optimal degree? Declaring degree as 1:10 keeps converging at 1 degree.
(Actually, the error is the lowest at 4th degree.)

(3) I think that normalization like figure(3) should not change the result. However, in this case, as shown in figure(2) and figure(3), the mean and variance show a large difference. Is this also due to overfitting?

I am looking forward to your advice. I sincerely ask for the advice of researchers.
If you want additional information of my problem please send e-mail to ‘minsu77@yonsei.ac.kr’
Thank you.

400 points in 5 dimensions should be enough for a reasonable fit, unless the model is very non-smooth and thus not suitable for PCE. But it seems that your model can be approximated quite well by PCE: it seems you achieve a relative MSE of 0.02 with 350 points. Do I understand correctly that you are using 350 points as ED and 50 points as validation set? Does Figure (1) display the Y-Y plot of the validation set?

Have you checked the mean of your ED? I would expect that mean(YED) \approx mean of the PCE. The moments of the PCE typically converge quite fast. Since your validation set is quite small, it might well be that its mean is different from the one of your ED. Especially when the Y-data varies a lot. Have a look at a histogram of all your 400 Y’s. Are there maybe a couple of outliers with very high values?

Regarding the rescaling you mention, I am not sure what you want to achieve with this. UQLab anyways does internally a transformation to standard variables. But if you insist on doing it, make sure you normalize only X, not Y, and change the input object accordingly.
I just realized you are probably using arbitrary PCE. So there is no input object, and UQLab does not do a transform. You can of course rescale both X and Y, but you will simply get a rescaled version of the PCE (as you also observed: it even has exactly the same LOO and validation error, but different values for the coefficients). It won’t change the fit.

Regarding your other questions:
(1) Overfitting is prevented by using LOO for model selection.

(3) See my above remark about normalization.

(4) This is very much dependent on the properties of your model. Have a look at @bsudret’s answers to the following questions:

Acceptable LOO Error Community Q&A and How To

Dear @Aep93 Thanks for your question. There is no theoretical limitation in the number of input variables when you want to build a polynomial chaos expansion (PCE) and then post-process it to get Sobol’ sensitivity indices. Using the 'LARS' option to build the PCE, you create a so-called sparse PCE, which has only a limited number of terms that are relevant to your model. In the past years we used sparse PCE without any issue with up to a few hundreds input variables. So 30 is definitely feasi…

Good luck, and let us know how you solved your problem!

Thank you for your kindly reply! 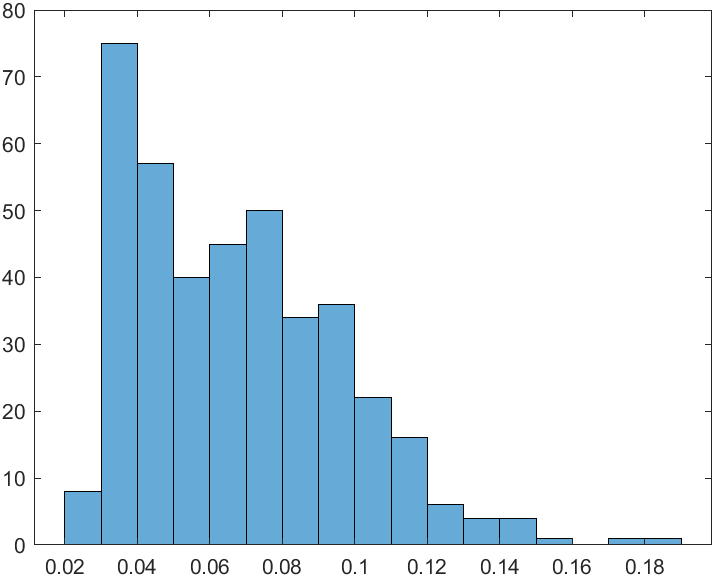 finally i have some question!

Does the histogram you show use all 400 data points? Then there is indeed something weird going on in your PCE fit. Also, the modified LOO is much too large. It sounds like your regression matrix might be ill-conditioned.