Hello all! I have been working on this project for some time now and it keeps going deeper into UQ - deep enough to create a case study post here to discuss ideas and provide a reference for other engineers who may want to do reliability analyses of complex structures that are collapsing.

Let’s get straight into the hot topic: I have, as expected, finite element structural models of a tall timber buildings for which I would like to carry out risk analyses. Therefore I am interested in the probability of collapse as well as the consequences of that collapse.

Importance intricacies of the models:

A summary of what I am trying to do is: I analyse a building at a given damage scenario (say, a column is removed) and observe the results: 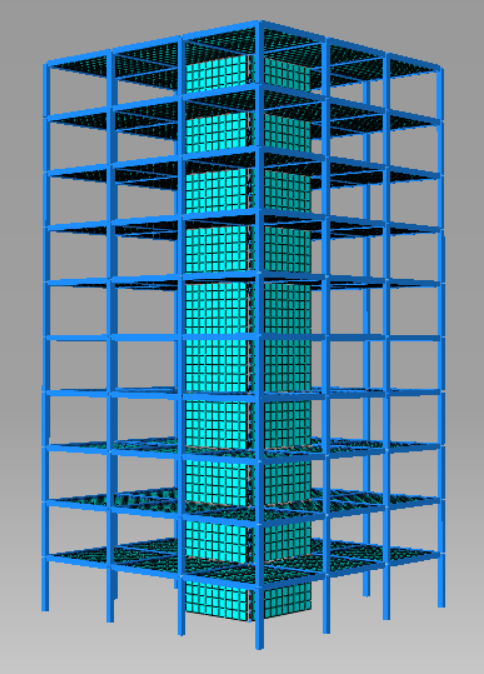 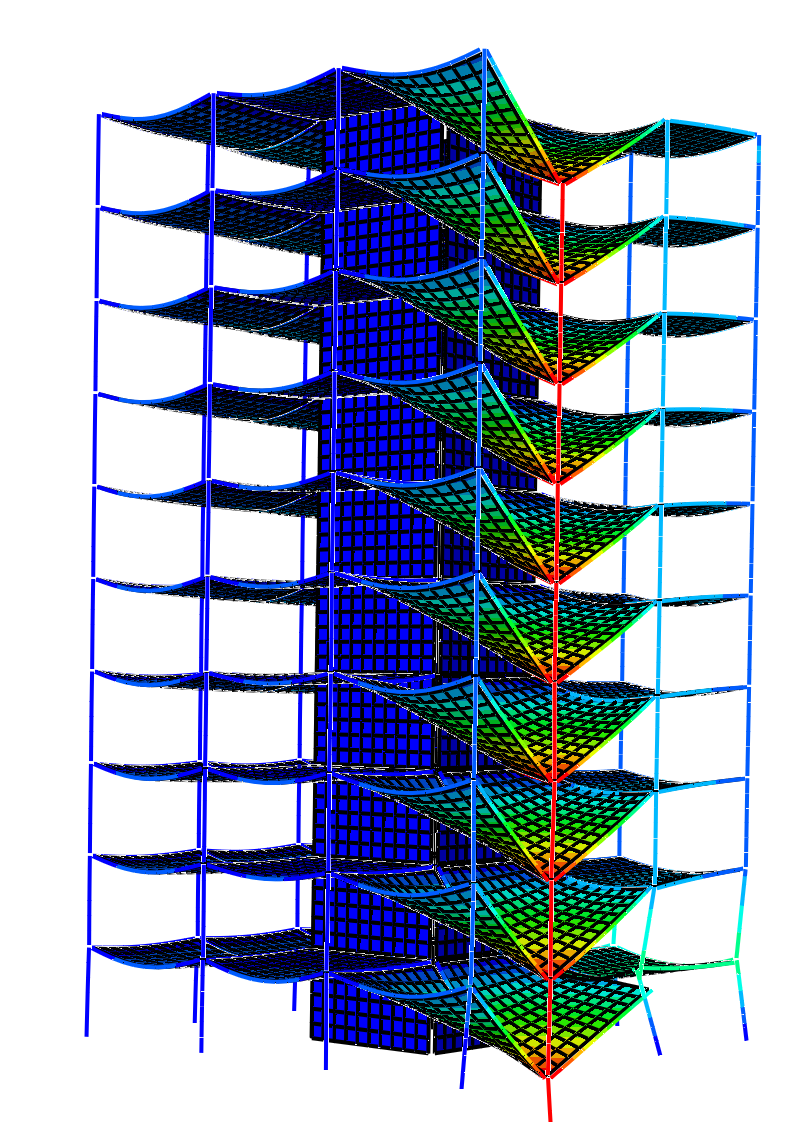 By looking at the final deformations of the floor plates, one can decide if a collapse has occurred or not. To demonstrate this analysis in a simple way, I will use a small 2D frame. See this first example below of this 2D frame which is able to survive with a missing column at the corner. 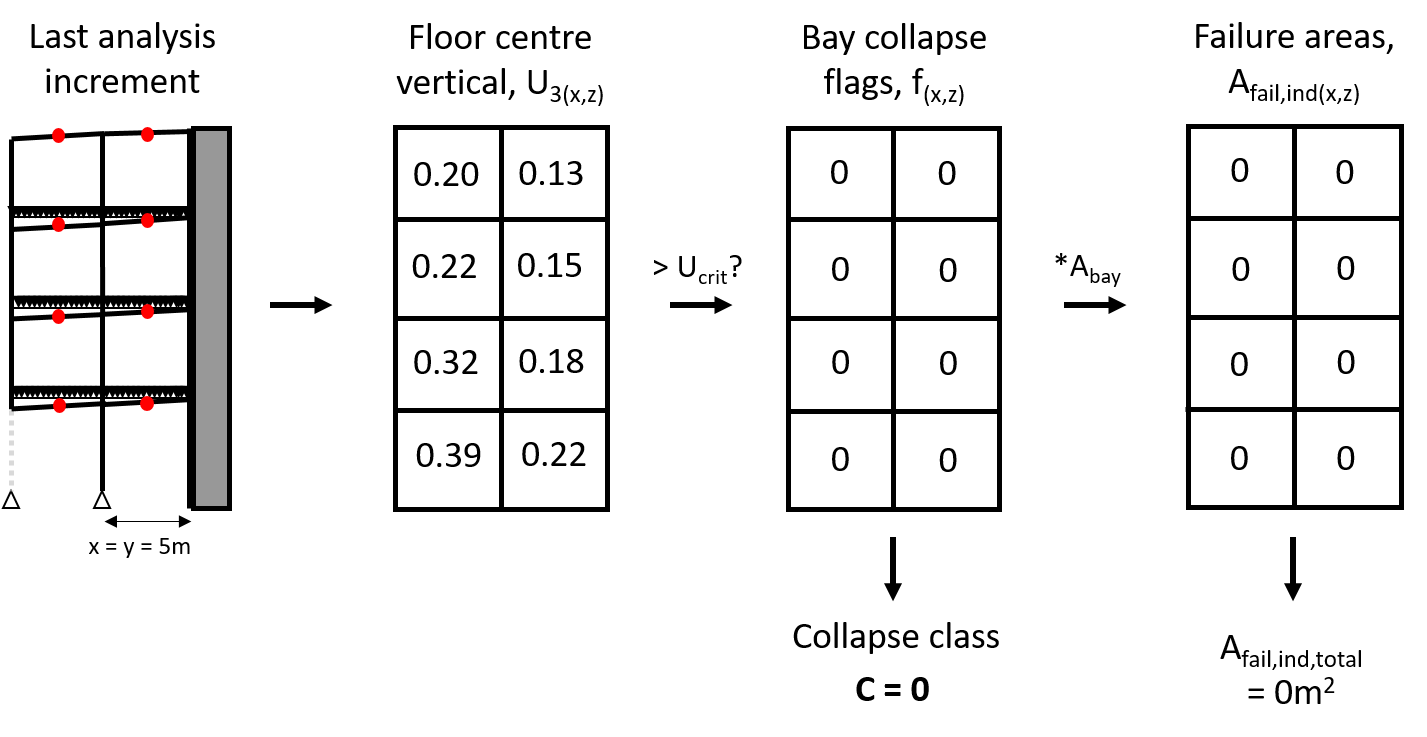 Now consider the same 2D frame, but in this particular realisation of the input vector the entire left section has collapsed. The deformations matrix, failure flags, collapse class, and failure area are calculated: 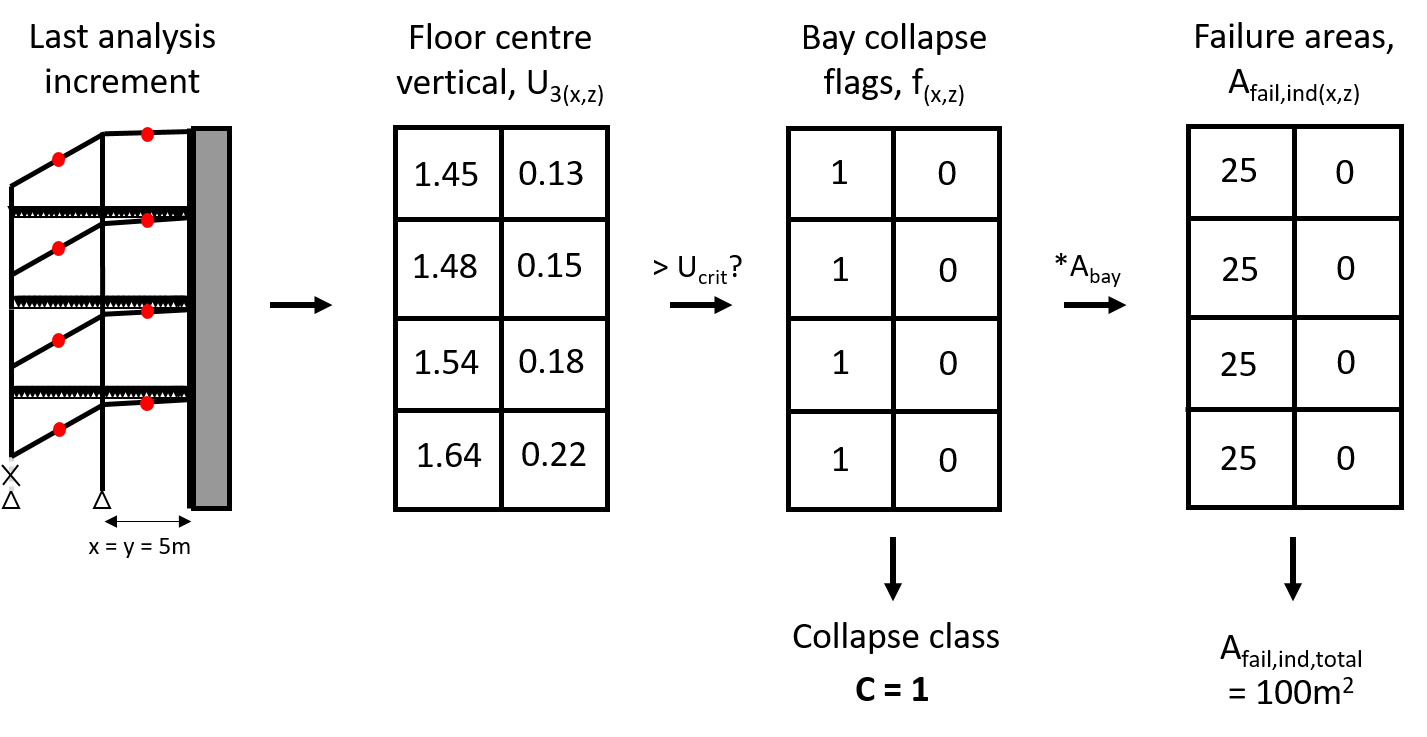 In a similar manner, different realisations may lead to different collapse classes: 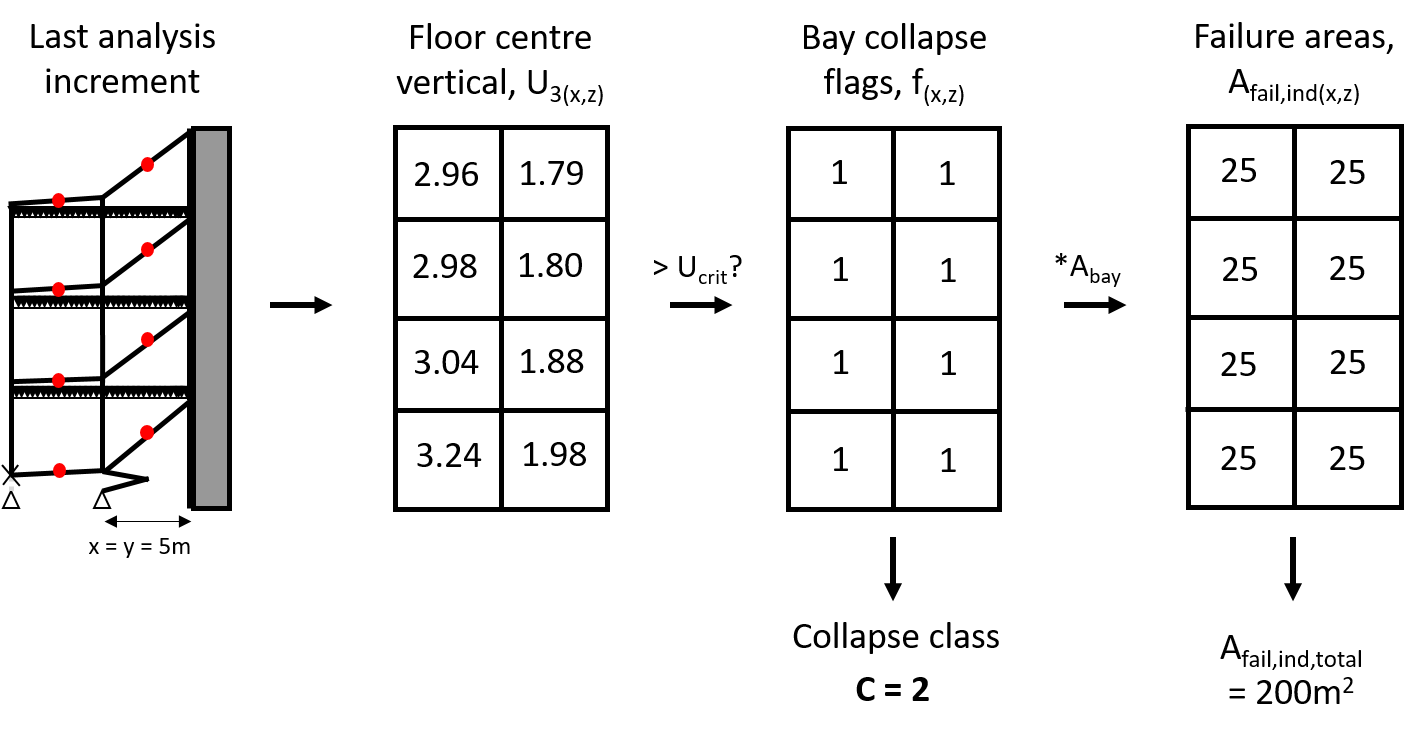 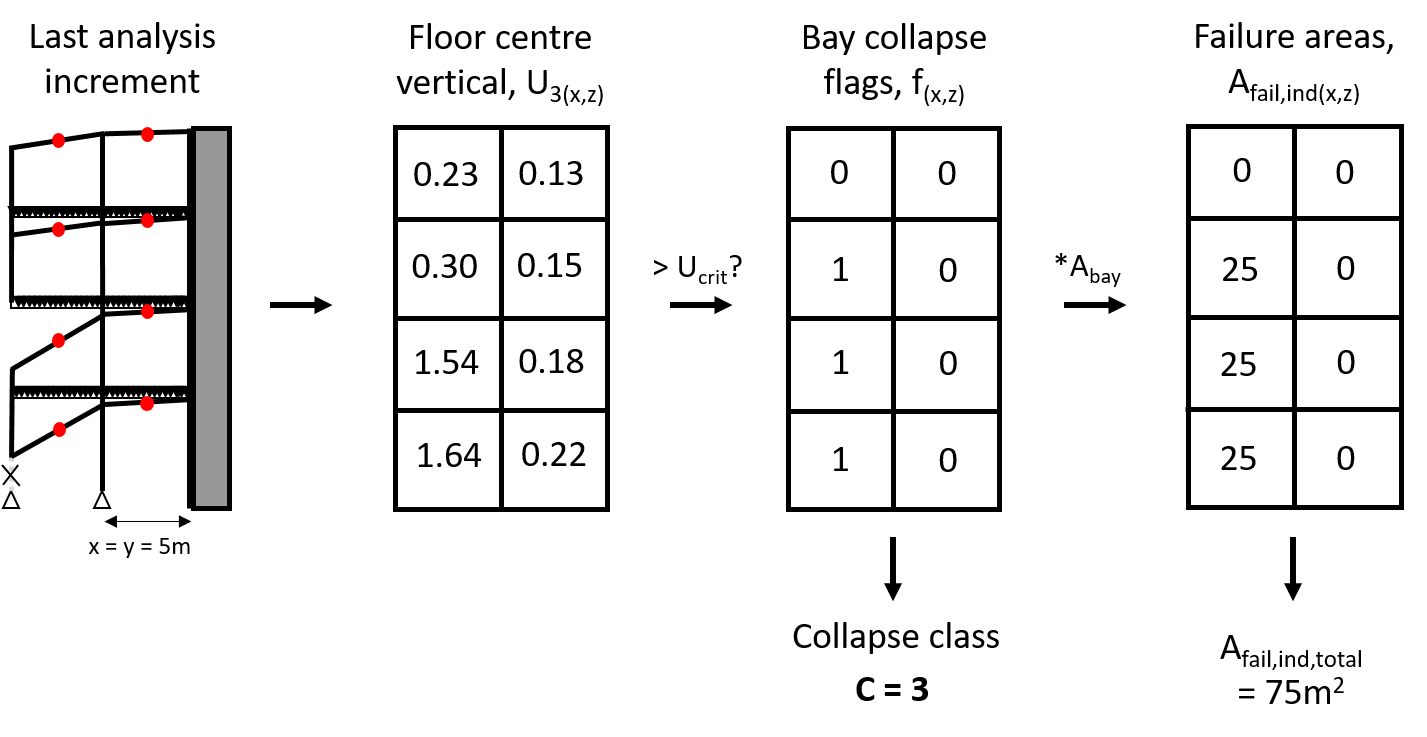 The tough question: can an adaptive metamodelling algorithm be built to use the least possible amount of data and be able to predict the most probable collapse classes given a new input vector realisation? I am aware of combinations of Kriging with Monte Carlo and Importance Sampling, but at this stage this is an open question.

Second tough question: how can I reduce the dimensionality of this model? Clearly, with thousands of dimensions I am asking for trouble.

To give a more generic example of the type of model I am trying to surrogate, here is a silly analytical equation I built with some conditional statements to make its response non-smooth (extreme “jumps” just like I expect the deformations of my building to be) and with multiple disjointed domains differing response (just like the existence of different collapse classes). I hope it makes sense/is a good representation. 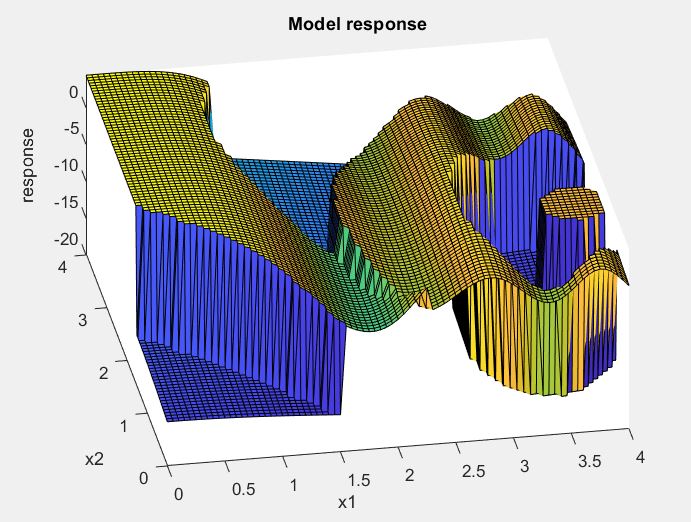 Here is the same plot but with an overall collapse flag of zero or one (pretty much a limit state “function”): 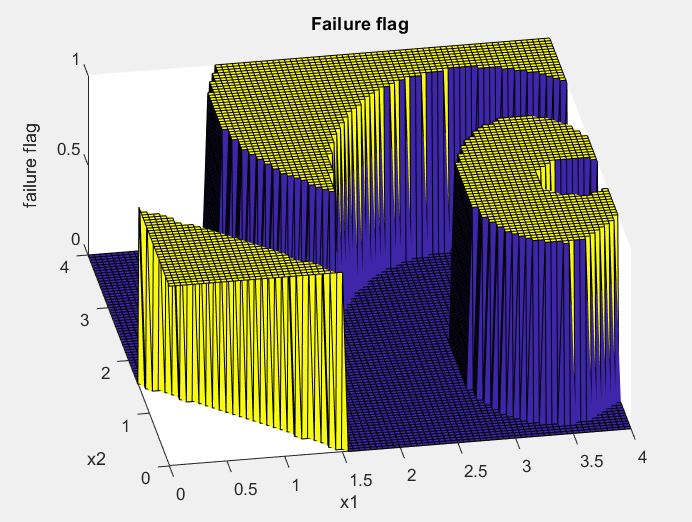 …however I am not interested in just a zero or a one: rather, each time I have a collapse I calculate the area and assign a collapse class. Therefore the plot would look like this: 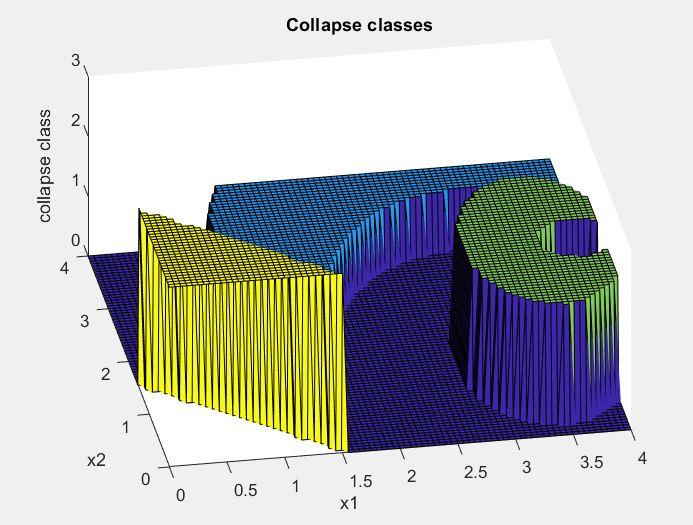 If you have feedback or ideas to share, please do so here! I will post progress updates when I have them.