I have recently done a Bayesian inversion with UQLab, in the following context :

As the discrepancy is small, I reckoned the standard deviation of the posterior predictive would be quite small (with an accurate measurement, not very probable, I think the uncertainty tends to decrease).

Actually, the standard deviation of the posterior predictive is quite small, but the inputs are almost as much uncertain as before. I mean there is not much reduction in the uncertainty of \lambda and E. I think the inference has created a correlation between my inputs, which prevents from extreme outputs. That is to say the coefficient of variation of the output has been reduced much more than the CoV of the inputs.

Here is the posterior predictive : 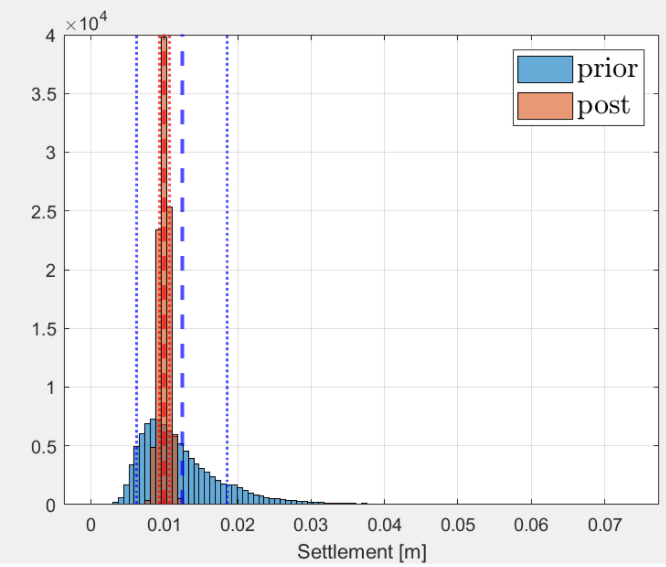 The thing is, there should not have a correlation between E and \lambda, because it does not have a physical meaning. 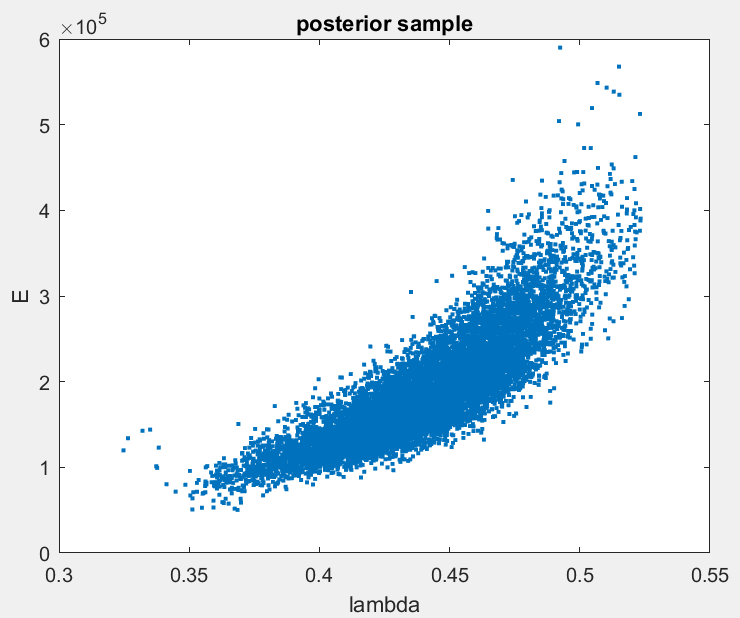 Thus my question is : is there a way to prevent the posterior inputs to become correlated ? To put it another way, is it possible to restrain the MCMC to uncorrelated values ?

My short answer: I think that you can not restrain the MCMC to uncorrelated values since the results of the Bayesian Inversion will be correlated since they are all model inputs leading to model outputs being approximation of the observations.

More details: .
I assume that you also had some value for the settlement S_{observ} that is considered as observation in the formulation of the Bayesian inverse problem. And it holds somehow (simplified) that the sample pairs for (\lambda_i,E_i) created by MCMC- computations satisfy that the corresponding output of the model, i.e. the settlement for all these data pairs are good approximations of the “observed” settlement. (If you have several observed settlements, you have (less) goood approximations for all of of them).
Moreover, I assume that you are in the situation that increasing \lambda and keeping E fixed will either increase or decrease the model output while increasing E and keeping \lambda fixed will change the model output in the opposite way. I suggest that you to check this.

I am not sure but it seems to me that you assume in your Bayesian inversion problem that the discrepancy in the problem is already known. It this is correct, I suggest to consider the situation wherin is discrepancy is also an unknown quantity. I think that this will change the posterior uncertainty in E and \lambda also.$.

Dear Olaf,
Thanks for your reply. I didn’t want to post an incomplete answer, so I’ve thought a lot about this.

You perfectly understood my Bayesian inversion, and the compensation between E and \lambda. Thus I reproduced an analytical fictitious example on the model f(x,y) = x-y. An observation f_i leads here to a huge correlation between X and Y.

That being said, our main problem is the posterior correlation, between a priori independant inputs. In our former example, the correlation between E and \lambda should not exist a priori, because it has not a physical meaning. It can seem strange that because of an observation, a correlation appears.

To conclude, I think the correlation between the posterior inputs is relevant, even if the assumption of independent prior inputs is made.

Finally, we do not use unknown discrepancy for now. I assume it does not help understanding the inversion, and can sometime hide some issues. Do you recommend the use of unknown discrepancy, especially when you can’t put numbers on its value (see my former post Bayesian inversion : discrepancy) ?

to maybe reduce your confusion I would like to present my private interpretation of the results of Bayesian inversion, following with modifications
J. Kaiiop, E. Somersalo, “Satistical and computational inverse Problems”, 2004, Sec 3.1:

1 Like
Bayesian inversion: how should the discrepancy model be calculated?
M_Groslambert (Groslambert) July 21, 2021, 9:03am #5

Thanks for your summary of the Bayesian procedure. It clearly puts into words the inversion steps.

Thanks for your answers, it helps a lot,

Just a remark: Be aware that the point of view in step 1,2 and 4 of my interpretation will not be approved by all UQ-experts, I already had some discussions about this.

The question is somehow what is the real update? Using a huge but know discrepancy yields that during the computation of the likelihood the error, i.e. the difference between model output and observation is divided by a large number such that the sum in the exponent of the becomes small, such that at the end the likelihood gets small variations… and at the end the update may be to small / to conservative.
I would suggest to use an unknown distribution, such that the largest possible value for he distribution if sufficiently large. I think that the default reaction of UQ-Lab (see Sec 2.2.6 of the manual) could be a start , i.e. the discrepancy is an additive Gaussian discrepancy term (with mean 0) and variance \sigma^2 and the prior distribution for \sigma^2 is the uniform distribution \mathcal U(0,\mu^2) with \mu being the empirical mean of the observed values (okay this maximal value is very large.)
It is my opinion that one can trust the result of computation with an unknown discrepancy if the omputed values for the discrepancy do not accumulate near to the maximal possible value. If they accumulate in this way, I would suggest to increase the maximal possible value and the re-perform the MCMC computations, even if this violates the rule that the prior should fixed before the measurement is done/ the measured value is used for further investigations.

Dear Olaf,
It is really interesting. I’ll do some research and try some tests in this direction.
Thanks,
Marc